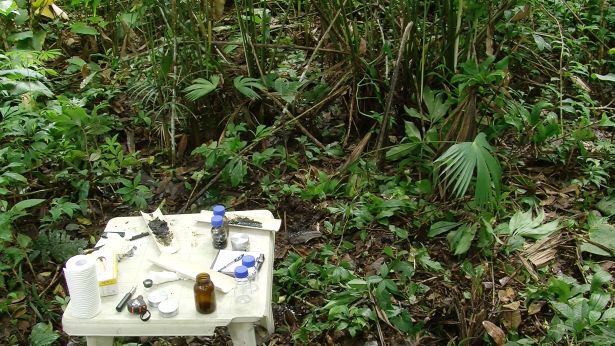 Considering nature as a rights-bearing subject, Forest Law (2014)—a collaborative video installation by Biemann and Tavares—brings us to Ecuador where, not without challenges of its own, this radically altered relationship to the Earth and the natural world has become possible.

Laying out the complex spatial and human-Earth relations—between transnational industry, migration and indigenous ecologies—Tavares and Biemann bring to light the work of indigenous lawyers and experts whose work in amending the constitution of the State of Ecuador (in effect since 2008) established fundamental rights to natural eco-systems. Fragile, complex and contested as this status might be, nature has become a subject of the national legal code, with the governments and corporations violently abusing and misappropriating it, in Ecuador at least, held to account.

Forest Law is guided by Biemann and Tavares’ research into a series of landmark legal trials in the Inter-American Court of Human Rights, where claims were made for the rights of nature in the face of human destruction occurring along the oil and mining frontiers in the (living) rain forests of the country. Though this mineral-rich and biodiverse Amazonian area is considered the sovereign land of indigenous nations, it has been under continuous pressure from a variety of national and international predatory actors (such as the oil giants Chevron/Texaco and CGC) eager to further exploit natural resources from a forest floor they have already left toxic and ridden with waste. Through a re-telling of these cases, Forest Law brings together the globally entangled concerns of environmentalism, of post-colony, of social justice and climate, and of the human and the posthuman.

Much like that which becomes acutely palpable in other works by Biemann (such as Subatlantic (2015) and Deep Weather (2013), also presented in the exhibition), Forest Law underlines the persistent fact that we are yet to learn to live otherwise in an age defined by the colossal consequences of a new socio-geological order we ourselves have created through irresponsible interactions with Earth’s systems. If the research and narratives in this exhibition articulate how global history entwines with nature, and how global nature entwines with histories all too located and consistent with globalization’s pattern of exploitation and marginalization: it also coalesces with past and future stories of resistance, and urges us to rethink, as one, the way of our being in the world and of being with the planet: something perhaps to become a key political project for our time.

Ursula Biemann is an artist, researcher and video essayist based in Zurich. Biemann’s work is invested in exploring the uneven resource distribution, climate change and ecologies of oil and water as principles of planetary organization of power. Paulo Tavares is an architect and urbanist whose work deals with the visual and spatial politics of territorial conflicts and climate change in the Amazon and other frontiers across the third world. Tavares is based in Quito.

Future Vocabularies/Human-Inhuman-Posthuman/Forest Law
The exhibition Forest Law by Ursula Biemann and Paulo Tavares is part of Human-Inhuman-Posthuman, a research, learning, exhibition, and publishing trajectory at BAK. Unfolding throughout 2015, it is realized through a dialogue with BAK Research Fellow Professor Rosi Braidotti, director of the Centre for the Humanities at Utrecht University, Utrecht. Human-Inhuman-Posthuman is part of the three-year project organized by BAK, Future Vocabularies (2014–16), a program of discursive, performative and arrtistic propositions that aim at composing a speculative conceptual lexicon through which to think the future anew.

The activities of BAK, basis voor actuele kunst have been made possible by financial support from the City Council of Utrecht and the Ministry of Education, Culture and Science of the Netherlands. The project Future Vocabularies is realized with generous support from the DOEN Foundation, Amsterdam.